Oh, to spend your days gazing up at the stars! When you were a child, this was your dream, and so you became an astronomer. You have lived your days as a scientist, seeking answers in constellations far from home.

But while your thoughts have been across the universe, the city you grew up in has become a perilous place. With each new mayor wreaking more havoc than the last, and an increase in natural disasters and crime, you have decided that those galaxies far away are more appealing than these streets you've always known.

If you remain here much longer, you will surely not survive.

You once read a book about a traveller who flew to a distant land in some sort of balloon, and the legend calls to you. You know how to build an airship, but you lack the resources. You know how to construct machinery that could produce such materials, but your hands have never laboured. You will need money, and staff, and time.

Soon you will escape this place. But will it be soon enough?

These can resemble anything (coloured paper squares, plastic cubes, lego bricks, paperclips, etc.) provided it is possible to determine which resource is which.

It is recommended that players colour their timber / metal / oil / textile machinery cards with pencil / marker that matches the colours of their chosen resource tokens, to make it easier for the player to remember which is which!

It is also recommended that players colour / mark the backs of each type of card, to make it easier to remember which face-down deck is which. Printing different decks on different coloured paper may also assist with this.

In order to download this game you must purchase it at or above the minimum price of $1.99 AUD. You will get access to the following files: 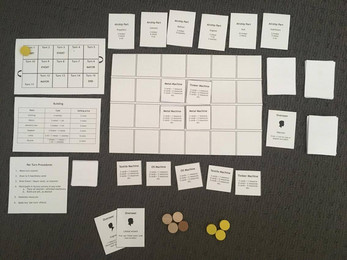 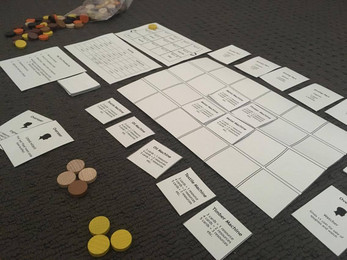